CIDAUT renews its participation in the Steering Group of the new Spanish Hydrogen Technology Platform.

In the process of growth of the interest on hydrogen technologies sector in Spain, the Spanish Hydrogen Technology Platform PTEH2 (old Spanish Hydrogen and Fuel Cell Technology Platform PTEHPC) is in a process of adaptation to these new times in order to provide valuable content. With this aim, the mission and objectives of PTEH2, as well as its structure, Working Groups and Internal Regulations have been reformulated.

Within this process, CIDAUT, as a technology centre linked to hydrogen technologies for more than 20 years, has been actively involved by renewing its participation in the Steering Group and acting as coordinator and vice-coordinator of the Working Groups on hydrogen use in mobility and use in industry, respectively.

CIDAUT will also work to ensure that PTEH2 achieves its three general objectives:

1. To be a forum of scientific-technical knowledge of reference: Promoting the exchange and dissemination of accessible, rigorous, public and independent R+D+i on the hydrogen sector.

2. To be a link between the Public Administrations and R+D+i: Consulting the Administration and national representatives based on the interests of the science-technology-innovation network and the keys to the short-medium term technological strategy.

3. To be a promoter of national and international cooperation: Coordinating the different stakeholders, establishing relationships with related sectors and proposing alliances and joint strategies.

The new corporate image and the changes approved and ratified at the General Assembly will soon be disseminated.

Last November, two relevant events took place at national and European level in the field of energy and hydrogen, which CIDAUT had the opportunity to attend.

On 16, 17 and 18 November, the 24th edition of the Energy and Environment Fair, GENERA, was held in Madrid. The Spanish Hydrogen Association, AeH2, organised on 16 November, in collaboration with the Spanish Hydrogen and Fuel Cell Technology Platform (PTE HPC), the conference ‘Green Hydrogen: towards a sustainable energy system’, which was attended by CIDAUT.

This day began with a brief welcome by Miguel Peña, secretary of AeH2, followed by a short introduction by Javier Brey, president of the Association, who began by stating that “interest in hydrogen in Spain is growing exponentially, not only in industry, but also among the population. This interest is more than justified due to the great potential of these technologies to move towards the decarbonisation of our economy”.

Subsequently, two round tables were held with the presence of representatives from the main entities involved in the hydrogen sector. The first round table, with the participation of Carlos de la Cruz Molina, Director of Evaluation and Technological Cooperation of the CDTI, and Santiago González, Head of Renewable Hydrogen in the Department of Regulatory Framework and Corporate Strategy of the IDAE, debated hydrogen as a reactivator of the economy.  The second round table was entitled: “Accelerating the development of hydrogen in Spain”. It was attended by the directors and heads of the hydrogen areas of the AeH2 promoter partners.

At European level, the European Hydrogen Week 2021 (EHW 2021) was held in Brussels from 29 November to 3 December. In this edition a hybrid organisation between on-site and online was chosen. CIDAUT attended virtually to the different presentations that took place.

The Week discussed the tremendous opportunities associated with the production and use of hydrogen and hydrogen-based fuels in the different sectors of the economy and how hydrogen will play a key role in the European Green Deal. The EHW2021 marked the public launch of the Clean Hydrogen Partnership – as the successor of the Fuel Cell and Hydrogen Joint Undertaking (FCH JU). This edition featured sessions on the future research and deployment priorities for Clean Hydrogen as well the FCH JU Programme Review Days and the FCH JU Awards. The week will also saw the third European Clean Hydrogen Alliance Forum uniting its 1500 members. Topics covered the entire value chain needed to realise the hydrogen economy, scaling-up production, infrastructure, and end-use sectors, research and innovation priorities as well as skills and education. 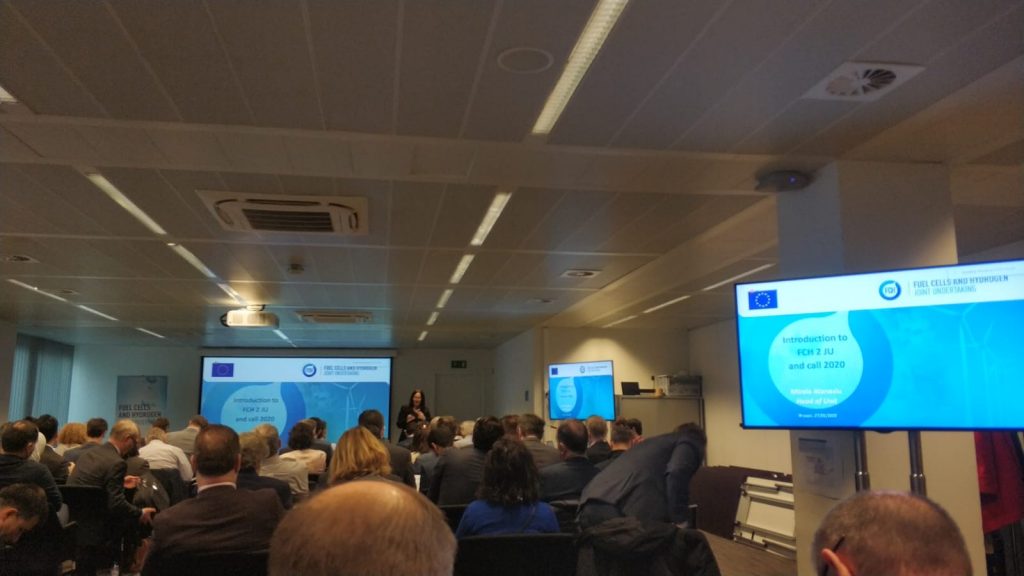 The European Commission presented the European Green Deal on Wednesday (11 December 2019), outlining the main policy initiatives for reaching net-zero global warming emissions by 2050 and  Hydrogen will be a key instrument for meeting the Green Deal objectives.

In this sense, several events are taking place in Europe to promote and develop hydrogen-based technologies and CIDAUT has attended two of them.

Following the launch of the 2020 Call for proposals, the FCH JU held its annual Info Day in Brussels on 27 January 2020.

The Programme Officers introduced the various call topics on transport pillar, energy pillar and cross-cutting area. Rules for participation, call conditions and evaluation were presented.  In addition, it was given advice for a good approach according to the evaluators’ vision, as well as a review on communication and dissemination of results. It was finally made an introduction to Hydrogen Europe Industry and Research and some National Contact Points.

The event gathered almost 400 participants from across Europe, both on site and online. The deadline for submitting the proposals is 21 April 2020. 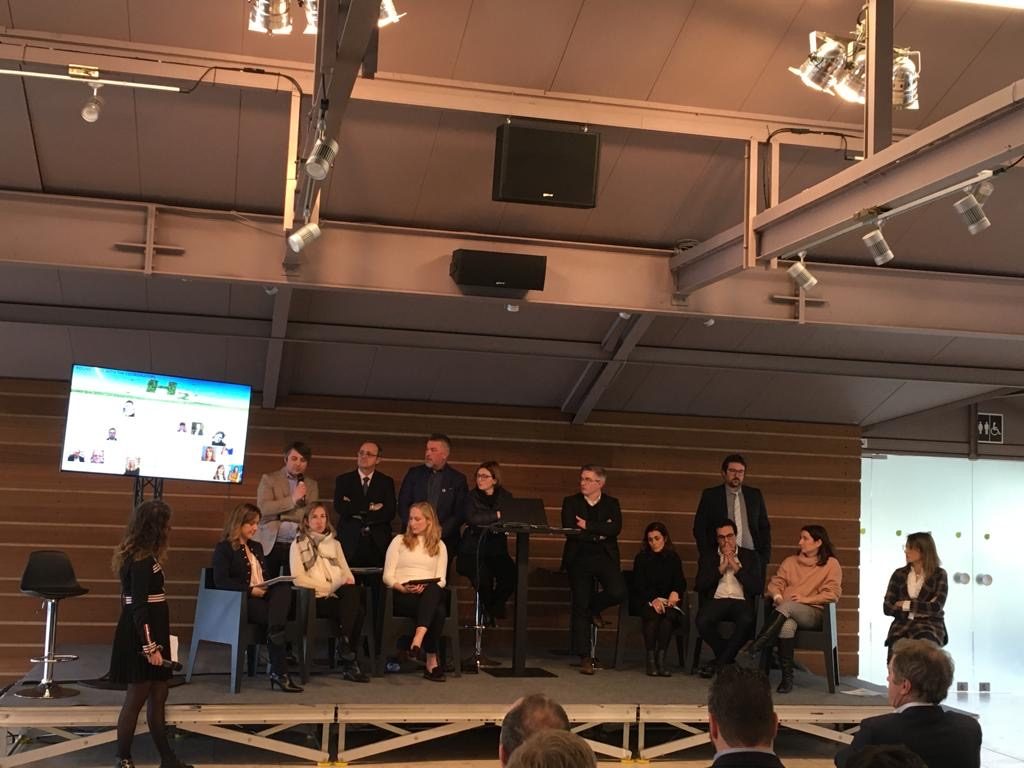 Following on hydrogen in Europe, CIDAUT has participated in the HyVolution event that took place on February 4-5 2020 at the Parc Floral de Paris. The two-day show provided an opportunity for meetings, discussions and business appointments, where all the players involved in the field of hydrogen were able to present their range of offers to the sector’s developers and decision-makers: products, services and applications for production, storage, distribution, gas-related technologies, etc. Some 120 exhibitors and brands were present at the show. The aim was to accelerate the deployment of hydrogen solutions by bringing together players from every potential market. 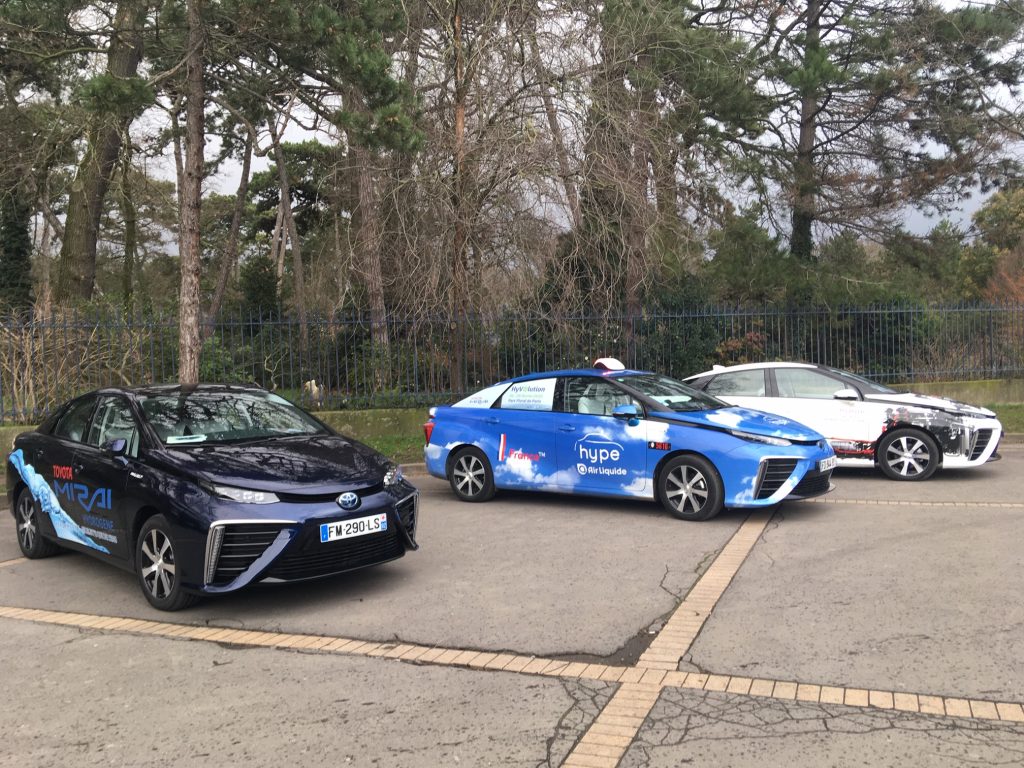 This year HyVolution 2020 hosted the third plenary session of the Hydrogen Valleys Partnership, attended by regional and European delegations. CIDAUT, as co-coordinator of the Working Group of Production, Transport and Storage participated in the plenary meeting and presented several pitches of project ideas, one of them developed by CIDAUT.

The plenary session was attended by FCHJU director Bart Biebuyck and Christian Weinberger of DG GROW who offered their vision on the future of innovation and financing in Hydrogen in Europe.

Hydrogen is an essential key in Europe’s energy transition and its efforts to cut carbon emissions and tackle climate change.  It is therefore expected to play an important role in the European Commission’s Green Deal. The FCH sector is also a valuable source of future jobs and growth in a green economy and CIDAUT is focused on this strategy. 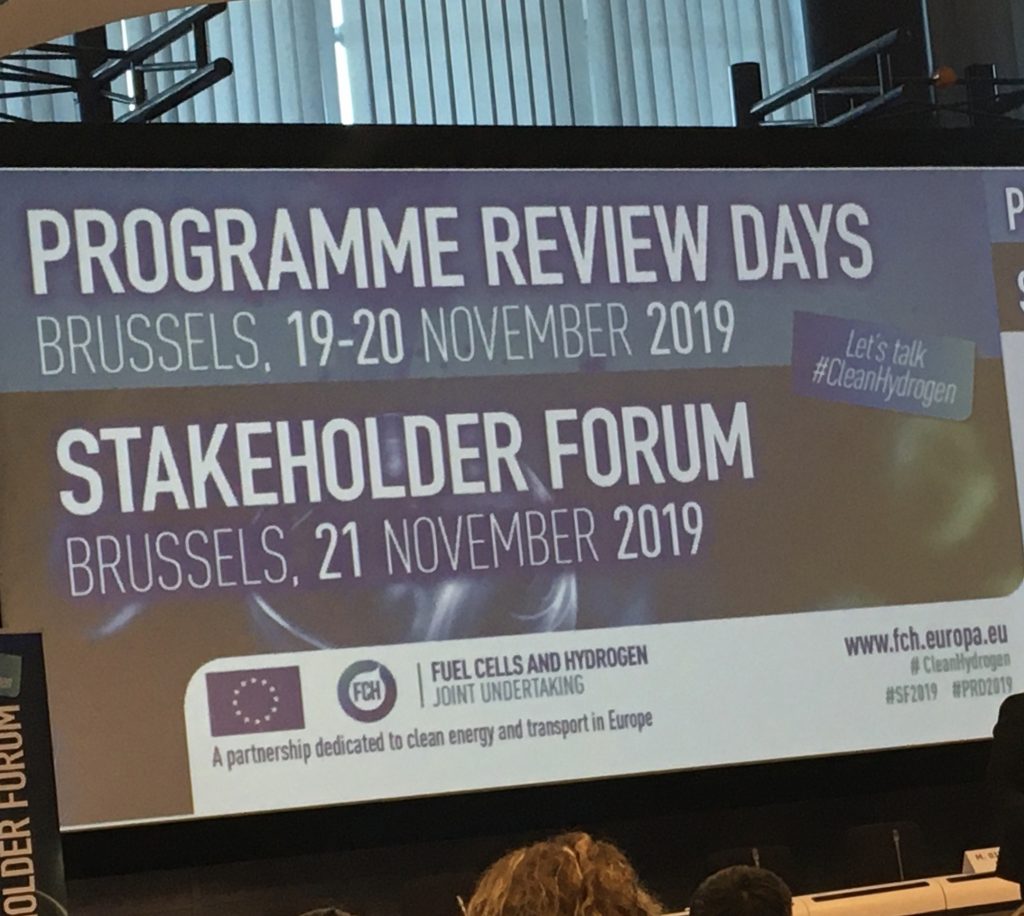 Different events have taken place in Brussels at the end of November in relation to hydrogen technologies and fuel cells. CIDAUT had the opportunity to be there. 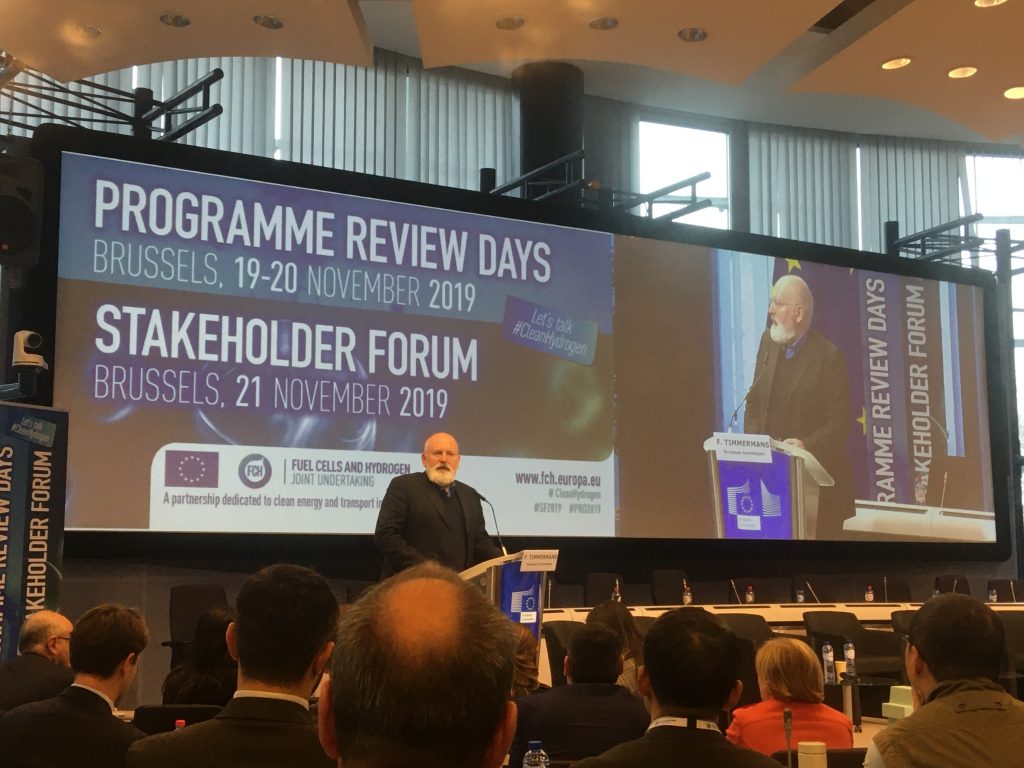 The Programme Review Days, organised annually, aims to provide an overview on the progress of the FCH JU funded projects. It constitutes an excellent visibility platform for the projects and the technological developments achieved in the sector and provides networking opportunities for the participants. 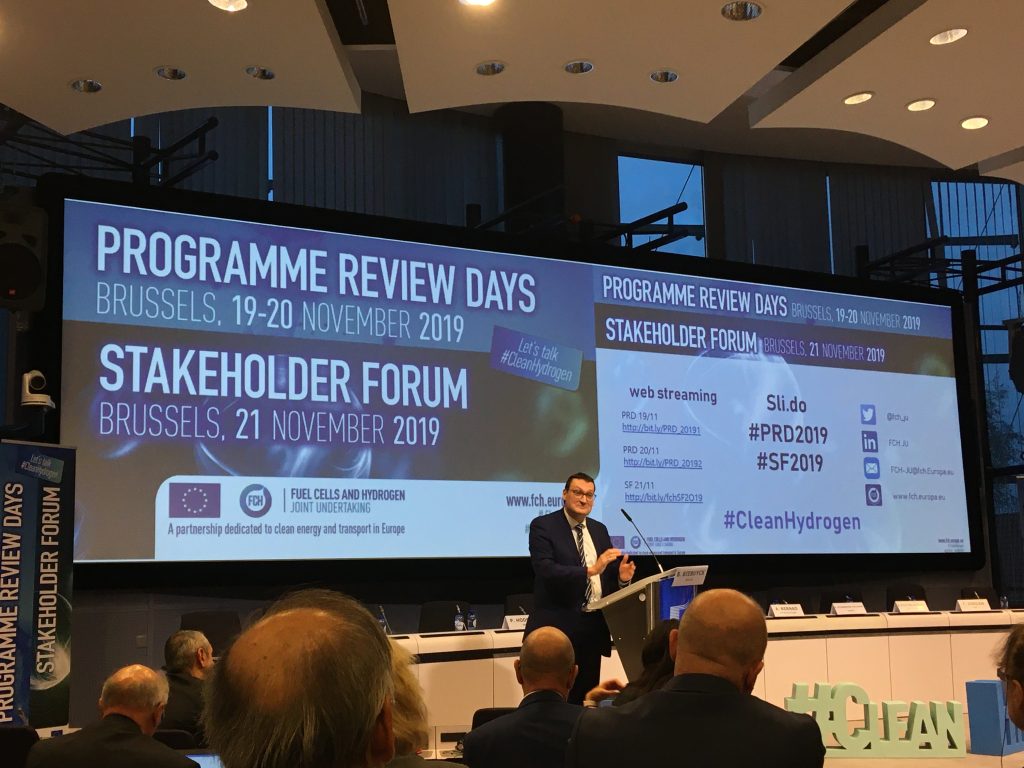 The Awards were presented at a ceremony at the Royal Museums of Fine Arts in Brussels on 20 November 2019, attended by about 300 industry, research and EU representatives. The winners were chosen by public vote, which mobilised the European Fuel Cells and Hydrogen community around the 24 nominees – 12 for each category (success stories and innovation). 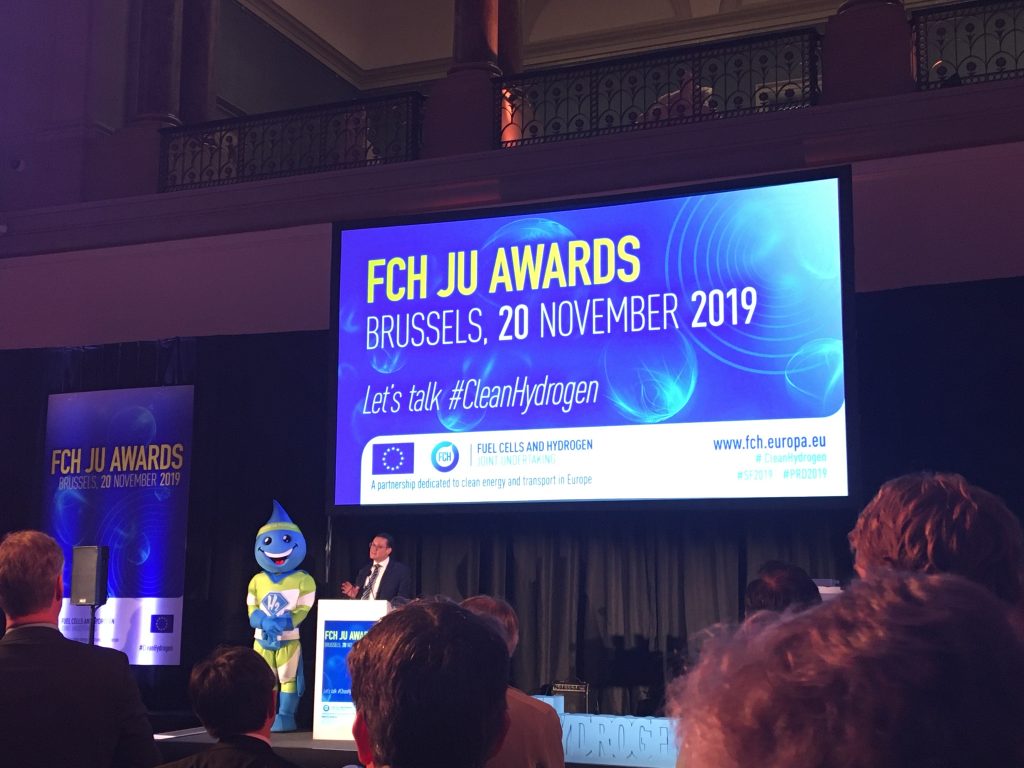 “These projects are delivering results that enable Europe to be a leader in the fuel cell technology and have a strong impact on the clean energy transition. The aim is to pry open market potential, ensuring a greener future for the EU’s transport sector” said FCH JU’s Executive Director Bart Biebuyck.

“The green energy transition is not an option but a necessity. I see a pivotal role for clean hydrogen…it is an area where Europe is still leading. Why not extend the lead on something that could be one of the most important solutions for clean energy?” said Frans Timmermans, First Vice-President of the European Commission, in the opening session of the 2019 Fuel Cells and Hydrogen Joint Undertaking (FCH JU) Stakeholder Forum, on 21st November. ‘The most important thing is that you help us to find ways to make relatively quick successes to show people that it works’ continued Timmermans,” addressing the forum – energy and climate experts from industry, research, EU institutions and local and regional authorities.

Discussions among more than 500 Forum participants in Brussels’ Charlemagne building focused on how to tackle the remaining hurdles to deployment, the importance of promoting an innovation culture in activating new markets, and the impact of synergies and international scale-up efforts on growth and jobs. Delegates explored the latest developments in the sector, showing how Europe is capitalising on new FCH developments and forging ahead towards a zero-emission economy.

Participants could also download the event app to stay up date with the conference programme and also join us on social media by following @fch_ju on Twitter – #PRD2019 #SF2019 #CleanHydrogen.

And to close the week, CIDAUT attended the meetings organized by the S3P Hydrogen Valleys working groups that took place on Friday the 22th November.

The working groups have been organized based on themes that arouse common interests for the development of interregional projects. Thus, CIDAUT as a representative and supporting the region of Castilla y León attended the meetings of the Hydrogen Production, Transportation and Storage groups, as well as Mobility uses. The objective of these groups is the approach of projects in the different themes that can be presented at the Hyvolution event that will take place on February 4 in Paris. CIDAUT will co-coordinate Production working group with Aragon Hydrogen Foundation and University of Bologna. 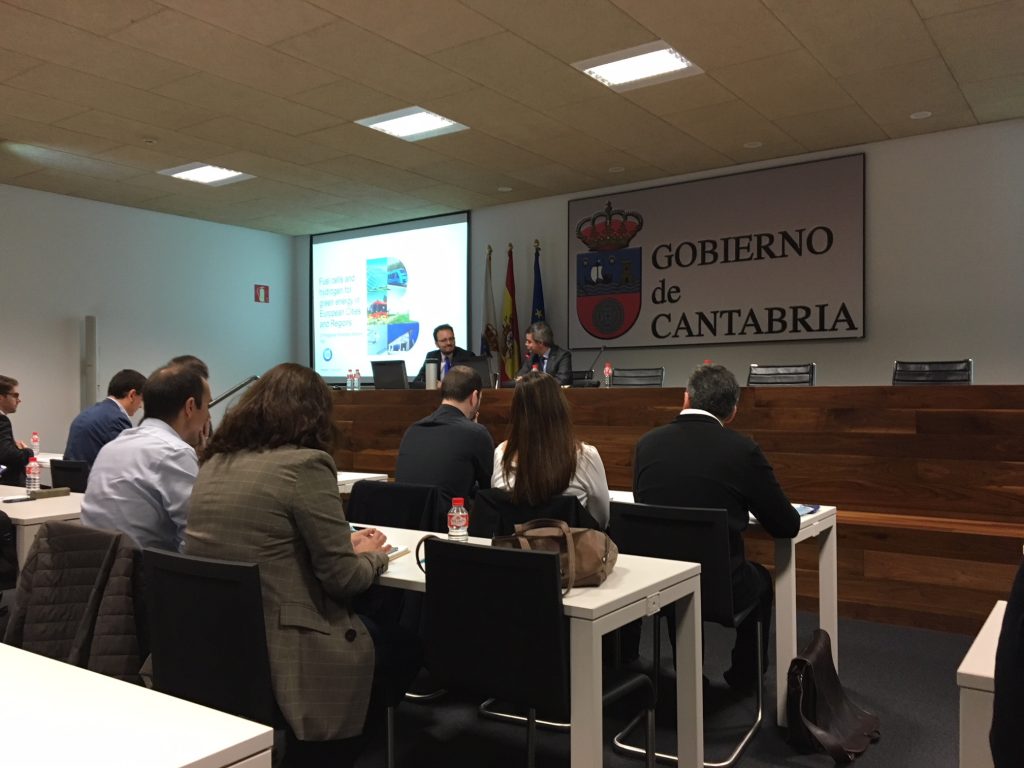 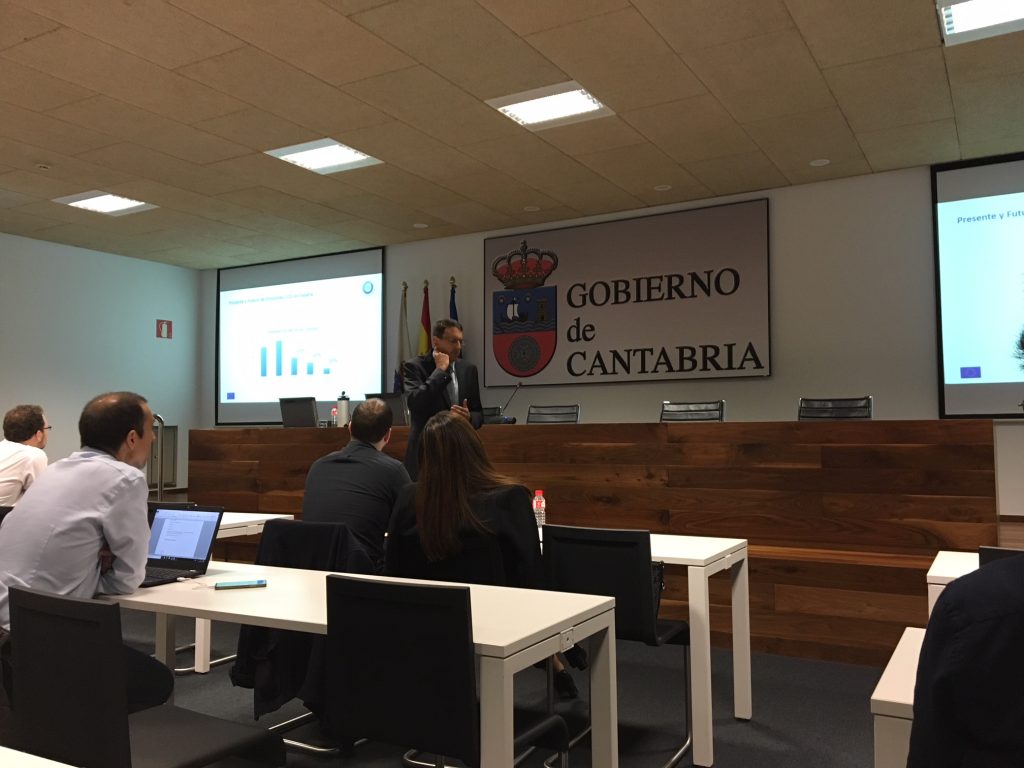 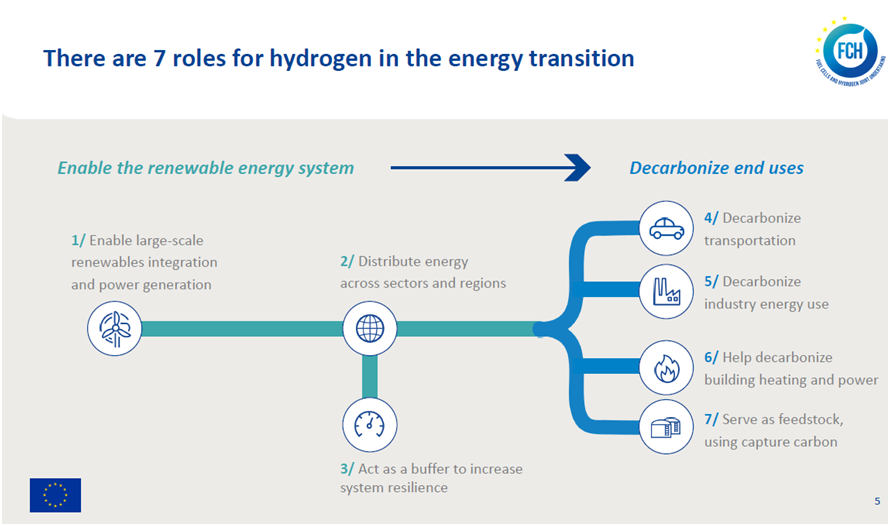 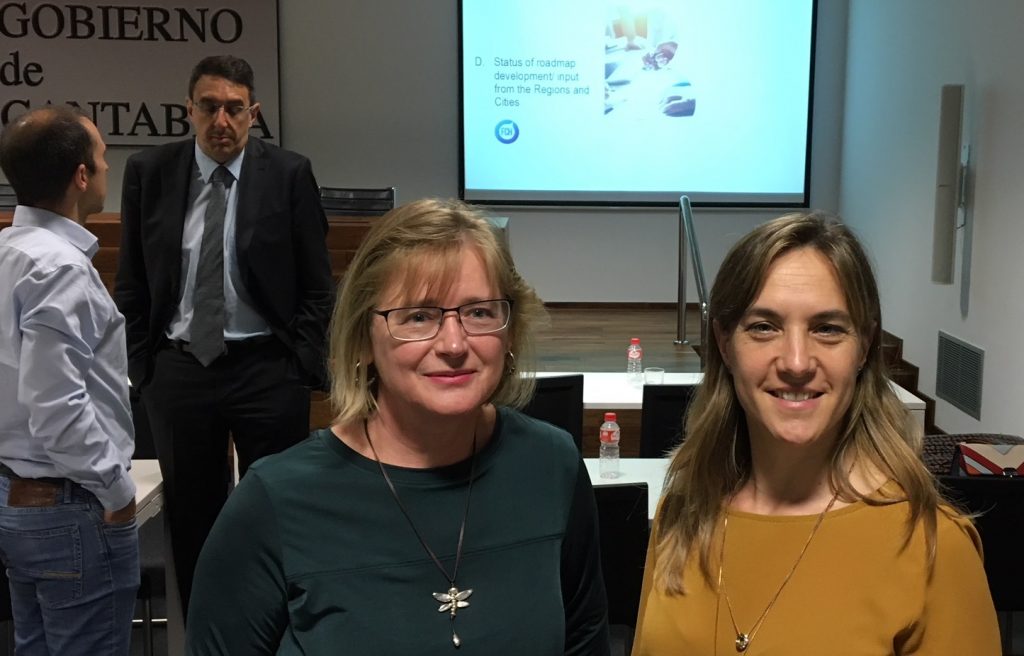