SAFE STRIP Project is reaching its final stage. After the users’ trials, successfully completed during the first half of 2020 in Trento (Italy), Thessaloniki (Greece), Athens (Greece) and Valladolid (Spain), different events have been hold in the three countries to share the results of the project with relevant stakeholders from the administration and the industry. The structure of the meetings have been quite similar with a presentation from the local partner to introduce the project and to show the most relevant results followed by a discussion with the invited stakeholders to better understand the time to market for the solutions and applications developed along the project.

In chronological order, the first of the events took place in Athens on  July 20th. it was hosted by the technical leader of the project, Certh. with representatives from the Greek Government and the European Commission. The meeting included a demonstration of some of the solutions developed along the project to show the assistants the important advantages in safety, traffic flow and infrastructure costs achieved thanks to the development of SAFE STRIP Project.

The second event was hold in Italy, organized by Centro Riserche Fiat and A22 Autostrada Brennero on July 22nd. In this meeting, the presence of infrastructure operators was especially relevant. It was highlighted that SAFE STRIP solutions could cover the need of a suitable communication channel to reach the drivers and riders, improving the current applications with a significant lower cost.

The third event was hold at Cidaut facilities in Boecillo on July 23rd. Due to COVID-19 travelling restrictions, it was a hybrid on-line and face-to-face meeting. The Leader of the Urban Mobility Center and the Coordinator of the Innovation Area and Economic Development were the representatives from the local administration, the Research and Development Responsible of AMAC Europe was the representative of the infrastructure operators and a development engineer from Road Steel Engineering was representing the infrastructure developers. The rest of the assistants was personnel from Cidaut who was involved in the project to explain the project results. The participants were invited to answer several questions in order to understand the acceptability of the solutions and applications with a successful response from the different stakeholders. 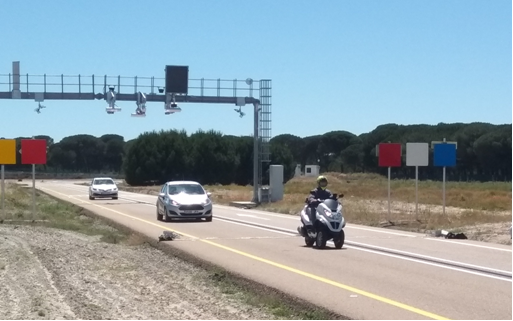 SAFE Strip Project, funded by the European Commission, is reaching its final stage with the users’ trials. The tests are running at Italy, Greece and Spain, under Cidaut’s responsibility. The Spanish pilots have been performed at Cidaut’s facilities, a controlled test track at Mojados. Six riders and ten drivers have tested nine different scenarios, where the applications developed along SAFE STRIP Project to support the users for a safer, more fluent and more ecologic way of driving have been evaluated.

The solution developed can be used in any kind of vehicle, independently from its automation level, because the information can directly reach the vehicle for the higher automation levels or be presented to the users through a friendly HMI in their portable devices, iOS or Android, for the lower levels. Most of the applications tested at Cidaut are related to safety: vulnerable road user protection, wrong way driving, motorway exit, work zone detection and variable message signal for low visibility, liquid on the road or heavy traffic. Others are oriented to improve the users comfort, the traffic flow and to reduce the environmental impact, like the virtual toll or the parking and charging application.

The system is based on the use of low cost components and sensors that thanks to different communication technologies provide intelligence to the transport system, obtaining as a result the cooperation between the different users of the road and the infrastructure. All the information provided by the different stakeholders is sent to a server in the cloud where all the information is managed and suitable messages are sent to the users through a friendly HMI with simple pictograms to improve safety, traffic flow and efficiency.

The applications tested allow the driver to be aware of critical situations like a hidden pedestrian crossing the road, a vehicle driving in the wrong direction, a vehicle stopped in a motorway exit, sliding pavement, lane closed due to road works, heavy traffic in front or low visibility. There are also applications dedicated to the comfort of the users, because the system allows the user to pay the toll on the air, without stopping or going through complex gates. With the solution developed is also possible to receive information about available parking slots and to make the payment totally automatically, without walking to the park meter nor having to start and stop the application, because it works automatically when the vehicle is parked.

The tests have allowed to evaluate in real conditions the performance of all the applications and also to measure the acceptance of the future users.

Along March and April CIDAUT will be in charge of the user trials of the European Project SAFE STRIP. The trials will involve 20 drivers and 10 riders that will test different safety applications installed in autonomous vehicles and also in standard vehicles C-ITS equipped. SAFE STRIPS aims to introduce a disruptive technology that has achieved to embed C-ITS applications in existing road infrastructure, including novel I2V and V2I, as well as VMS/VSL functions into low-cost, integrated strip markers on the road; to make roads self-explanatory (with personalized in-vehicle messages) and forgiving (due to advanced cooperative functions) for all road users (trucks, cars and vulnerable road users, such as PTWs riders) and all vehicle generation (non-equipped, C-ITS equipped, autonomous), with reduced maintenance cost, full recyclability and added value services, as well as supporting real-time predictive road maintenance functions. 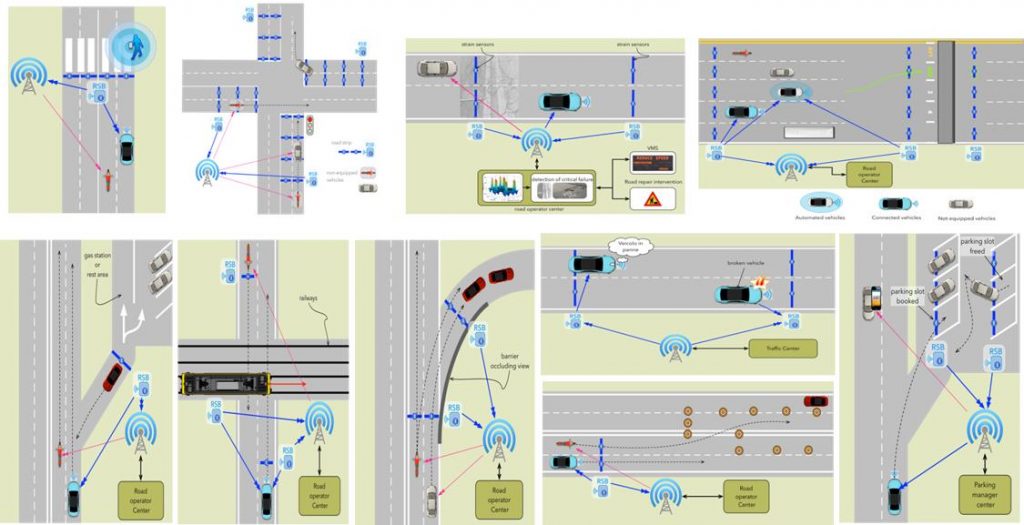 Along the tests CIDAUT will make pre and post questionnaires to the users that together with the data registered in the trials and the traffic flow simulations made by the University of Trento will provide all the information needed to make an impact assessment about the influence of the solutions adopted in safety, mobility, efficiency and exhaust emissions. In parallel, a cost benefit analysis will be performed to determine the economic availability of the different solutions implemented.

Safe Strip is a European Project funded in the H2020 Frame Programme. It started in May 2017 with the aim to introduce a disruptive technology that will achieve to embed C-ITS applications in existing road infrastructure following a low cost – high impact approach. For the last two years and a half the technical development of the strips and the definition of the different use cases have been achieved. The performance of the different parts of the system have been tested in laboratory and open road conditions, but now the trial phase has reached to the critical point.

The 35 scenarios, classified in 9 uses cases defined in the project are going to be tested with real users in five different test tracks: Centro Ricerche Fiat and A22 in Italy, Thessaloniki and Atiki Odos in Greece and Cidaut in Spain. For the tests different vehicles will be used, motorcycles and cars, with different levels of automation. 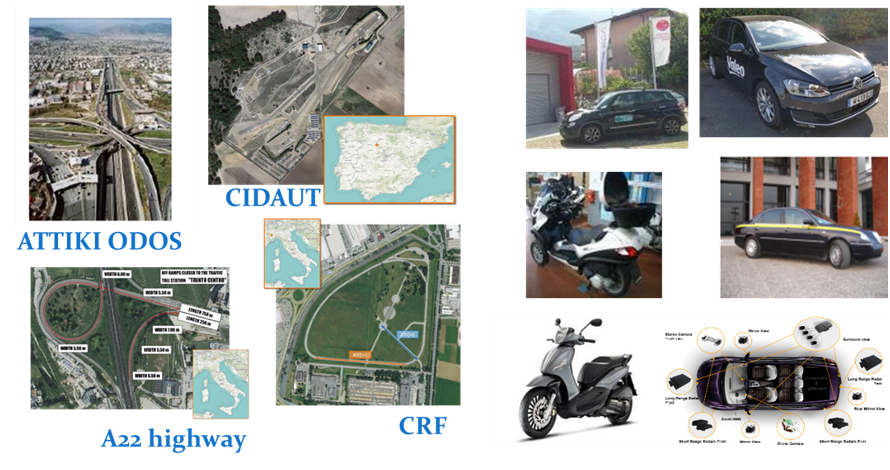 Trials sites and some of the vehicles to be used

The results of the tests will be quantitatively and qualitatively analyzed, through vehicle instrumentation, surveys and questionnaires in order to assess the impact of the applications developed in Safe Strip in the safety, environment, society, traffic, economy and the users’ acceptance.

The Safe Strip Consortium, formed by 18 partners, has met in Brussels with the Project Officer to analyze the evolution of the project. SAFE STRIP aims to introduce a disruptive technology that will achieve to embed C-ITS applications in existing road infrastructure, including novel I2V and V2I, as well as VMS/VSL functions into low-cost, integrated strips markers on the road; to make roads self-explanatory (with personalized in-vehicle messages) and forgiving (due to advanced cooperative functions) for all road users (trucks, cars and vulnerable road users, such as PTWs riders) and all vehicle generations (non-equipped, C-ITS equipped, autonomous), with reduced maintenance cost, full recyclability and added value services, as well as supporting real-time predictive road maintenance functions.

The review meeting was a good occasion to show the actual status of the prototypes of the strips that will be used along the users’ trials.