CIDAUT highlights “The role of hydrogen in the energy transition”

The current decarbonisation policies place hydrogen in the spotlight of sustainable energy development. This aspect is reinforced by the fact of the need for large-scale energy storage to manage an electrical system with high renewable production where hydrogen plays a fundamental role. In addition, on February 11, the “Hydrogen Roadmap Europe” was published by the Fuel Cell and Hydrogen Joint Undertaking, which highlights the need to use hydrogen to achieve high decarbonisation rates and reduce CO2 emissions by 80%. 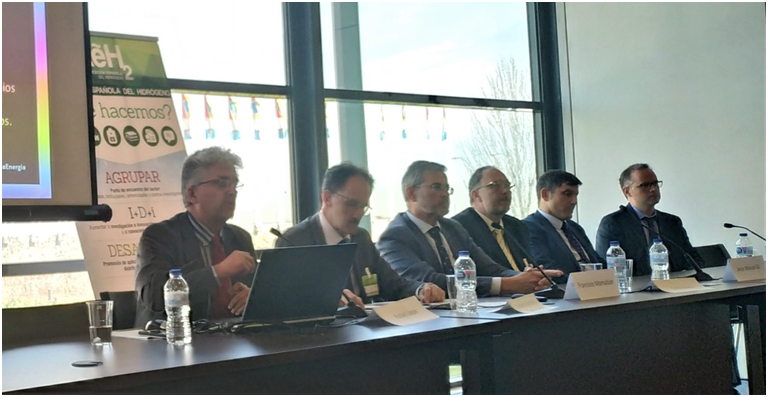 CIDAUT as a national reference in the field of hydrogen technologies participated in the technical conference of February 28, 2019: “The role of hydrogen in the energy transition”, which was developed within the program of activities of the International Fair of Energy and Environment (GENERA) held in Madrid.

This conference helped to highlight the key role that hydrogen will play in the energy transition and to define the actions that must be carried out to achieve the development of these technologies in Spain. During the conference, attended by the Secretary of State for Energy, José Domínguez Abascal, the current decarbonisation policies were discussed and the need for the implementation of hydrogen technologies in the European context of energy transition was exposed.

In the first round table of the day, the representatives of the main Ministries and national entities related to Energy, Industry, Science and Innovation debated on the importance of hydrogen to reach a carbon-free energy system.

In a second part of the conference, institutional partners of the AeH2 presented the “Main initiatives of the hydrogen sector and fuel cells in Spain”. As one of the partners, CIDAUT exposed its extensive experience in R&D projects within the field of hydrogen technologies and stressed its commitment to the future of hydrogen as an energy vector and decarbonization factor.

But this was not the only event that took place in Madrid on hydrogen. On March 1, the National Infoday of the Call 2019 of the FCH 2 JU was held in the Assembly Hall of the Center for Industrial Technological Development, CDTI. CIDAUT attended the Infoday where we could know firsthand all the information related to the call.

During the Infoday, Ms. María Luisa Revilla, from the Department of Social Challenges of the CDTI, presented the objectives and general vision of the FCH 2 JU and the H2020, as well as the rules for participation and presentation of proposals within the framework of H2020. The infoday was attended too by Mr. Carlos Navas, Head of the Strategy and Market Development Department of the FCH 2 JU, who presented the strategic vision and role of hydrogen in the European energy transition. In addition, he presented the topics included in this call and the keys for the presentation of proposals. The budget of this call is 80.8 million euros and 17 topics are considered: 5 related to transport, 8 with energy, 3 cross-cutting or cross-sectoral themes and 1 general. Finally, Mr. Antonio González, vice president of AeH2 and president of PTE HPC, explained the current situation of hydrogen technologies and fuel cells in Spain, explaining the key role they will play in the energy transition towards a carbon-free system.