ReFreeDrive project reached half of its length last March. This means it was time to hold the Midterm review meeting. To this end, all project members and the Project Officer met last 22nd and 23rd of May in Brussels, at Aurubis facilities. 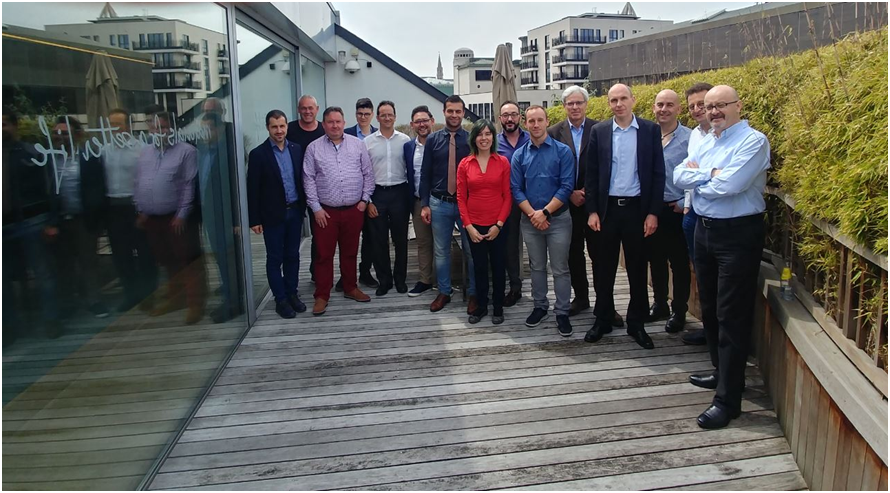 During the meeting, the main achievements of the project were noted, and the results of the different tasks carried out by each consortium member were discussed. At this point, the motor design stage is finished, so the results obtained give an accurate idea about what can be expected from the final prototypes. Fortunately, all projects KPIs and milestones are being successfully accomplished; hence our expectations remain the highest for the second half of the project.

In the following months the optimized motor designs for both configurations (induction and synchronous reluctance) and power levels (200kW and 75kW) will be manufactured and tested.

Last March ReFreeDrive project, coordinated by CIDAUT, reached the half of its length. The ReFreeDrive project is focused on contributing to avoid the use of rare earth magnets through the development of a next generation of electric drivetrains, ensuring the industrial feasibility for mass production while focusing on the low cost of the manufacturing technologies. 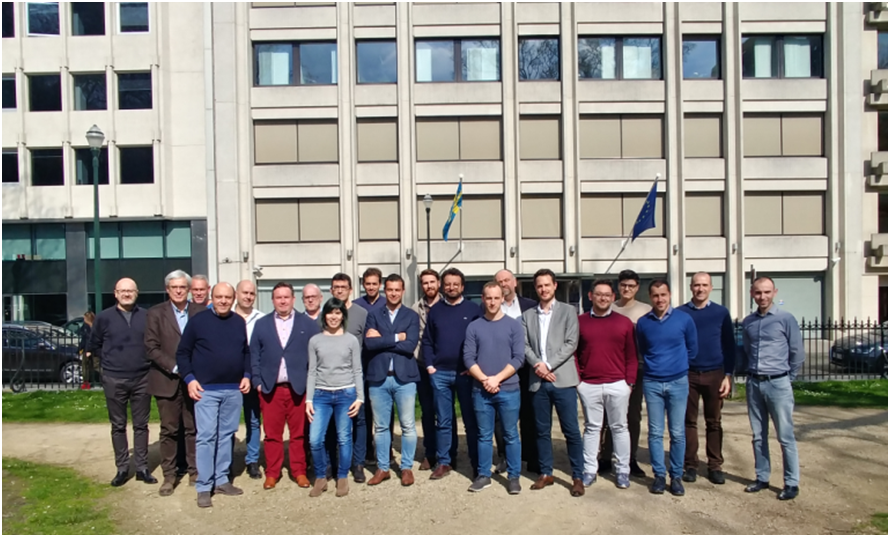 On the occasion of the 18 months since the beginning of the project, its partners met on 20th and 21st March at Brussels for a new General Assembly meeting. During the meeting, the tasks carried out by the partners during the last six months were reviewed, and the status of the different Work Packages was analysed in order to define actions for the second half of the project, when the 8 e-Drives (200kW and 75kW) will be manufactured and tested.

Also on these days CIDAUT attended the joint GV04 dissemination event, which took place in Brussels, too. The workshop presented the innovations that are currently being developed by three EU-funded projects under the European Green Vehicles Initiative (EGVI): ModulED, ReFreeDrive and DRIVEMODE. This event allowed exploring synergies between the three projects in order to maximize the outcome of the innovations under development within each one of them. 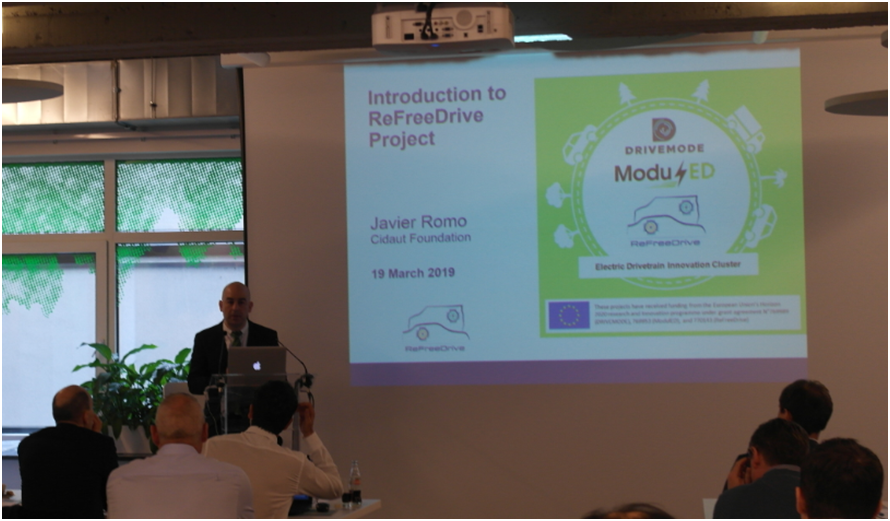 More than 100 people showed interest in the event and around 75 of them attended the workshop (36 people belong to the project consortia, while 68 people are external audience), many of them belonging to leading edge organizations in the field of electric drivetrain design and innovation.

Last April, the NEOHIRE Consortium, formed by 10 partners, met at KOLEKTOR premises in Essen (Germany) to analyze the evolution of the project. Members of the Advisory Board and the Technical Monitor also were present at this meeting. The progress made so far in the project was presented to them and they gave their recommendations to continue the lines of research initiated. 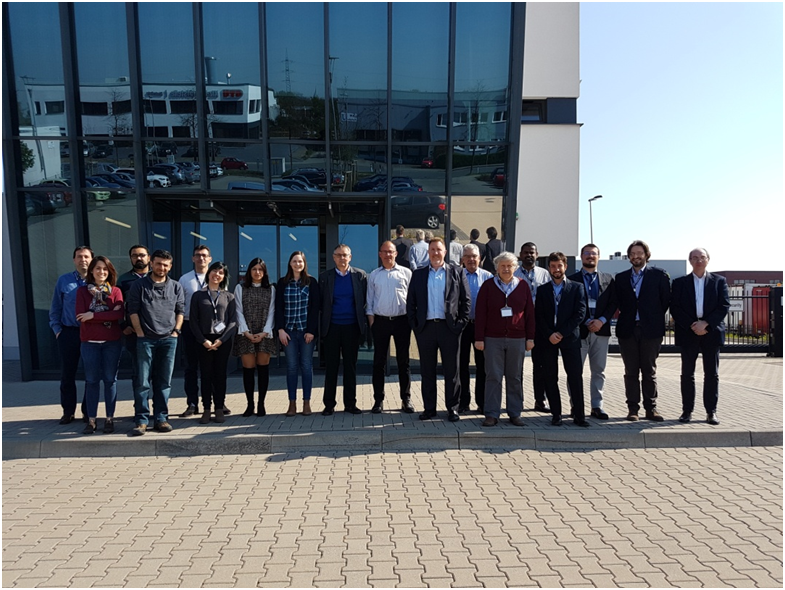 NEOHIRE aims to reduce the dependence on magnet material for the manufacture of electric motors and generators. In this scenario Cidaut presented the status of the Work Package 3 of the project, which is related to the design, modeling and simulation of a novel full-scale wind turbine generator using the magnets developed in the project.

MetalMorphosis Project finishes its activity with a successful Final Seminar.

The main results and conclusions obtained during MetalMorphosis were presented in Ghent on the 24th of February 2016. The event was hold in the Belgian Welding Institute facilities and more than 50 experts from different technology fields attended the event.

Every partner in the consortium presented the work done, the knowledge acquired and the next challenges to be faced. The main conclusion of the event was that MetalMorphosis project has been an important step forward in the consolidation of the hybrid joints metal-composite in the automotive sector.

Centimfe as project coordinator presented the main milestones covered by the project and the general targets achieved. Ideko and Cidaut focused their presentation on material selection, process optimization and product design. The joining technology was mainly described by Belgian Welding Institute and Poynting, while the life cycle assessment was explained by Stam.

Finally, each of the end users involved in the project presented their demonstrator. In the case of Tenneco, the bottom closing of a monotube shock absorber was used as a case study. The welded steel loop was therefore replaced by a composite part in PA66 with glass fibres produced by injection moulding. This solution has the advantage of producing lighter shock absorbers (15 % saving) while keeping the requirements for a structural part. The technology can be integrated easily in the manufacturing process, keeping the product at an acceptable cost for the market.

Tool Presse presented his hybrid solution (metal-composite) for a pedal brake with a 17% weight saving and important reduction on cost and production process time. The prototype presented was previously validated attending to the requirements defined during the project.

Regeneracija showed his frontal bumper manufactured in aluminium and CFRP. The manufacturing process has combined RTM with electromagnetic joining in order to obtain a 50% lighter component fulfilling all the requirements of this kind of component.

The 30 months Metalmorphosis Project is really close to its end. In order to show and demonstrate the results achieved a final seminar is going to be held in the headquarters of the Belgian Welding Institute in Gant on the 24th of February 2016.

The admission to this event is free subjected to registration: http://goo.gl/forms/H0qr2ud0zY

The project has been focused on the development and optimization of hybrid joints between metal and composite hybrid parts in order to obtain enhanced automotive components with integrated functions. The joints are obtained thanks to the application of electromagnetic forces. This technology allows joining composite materials that are not weldable, eliminates the heat affected zone, is a clean process and reduces the cost of the joints. In the first half of the project, important innovations have been introduced in tubular and flat joints working with laboratory specimens, while in the second half, the knowledge generated has been applied to the development of automotive components.

The consortium is formed by nine partners. BWI, Centimfe (leader), Cidaut and Cidaut have focused their effort in the research and development activities. STAM is the responsible of the LCA analysis. Poynting is an SME specialized in the development of electromagnetic joining devices. Regeneracija, Tenneco and Toolpresse are the industrial partners of the project; each of them has developed, with the support of the consortium, a demonstrator to apply the knowledge and demonstrate the advantages of the electromagnetic joining.

Regeneracija has designed a bumper, where the crash box is designed in CFRP, and the cross beam is a sandwich of CFRP and aluminum. All the parts have been assembled attending to the technology developed for flat joints.

Tenneco has improved the design of its shock absorber reducing the number of components and simplifying the assembly process thanks to the integration of functions through electromagnetic tubular joints.

Toolpresse has created a new concept of hybrid pedal brake where both ends are manufactured by plastic injection to fulfill the geometric requirements and the central part is extruded in aluminum obtaining a stiff light component.